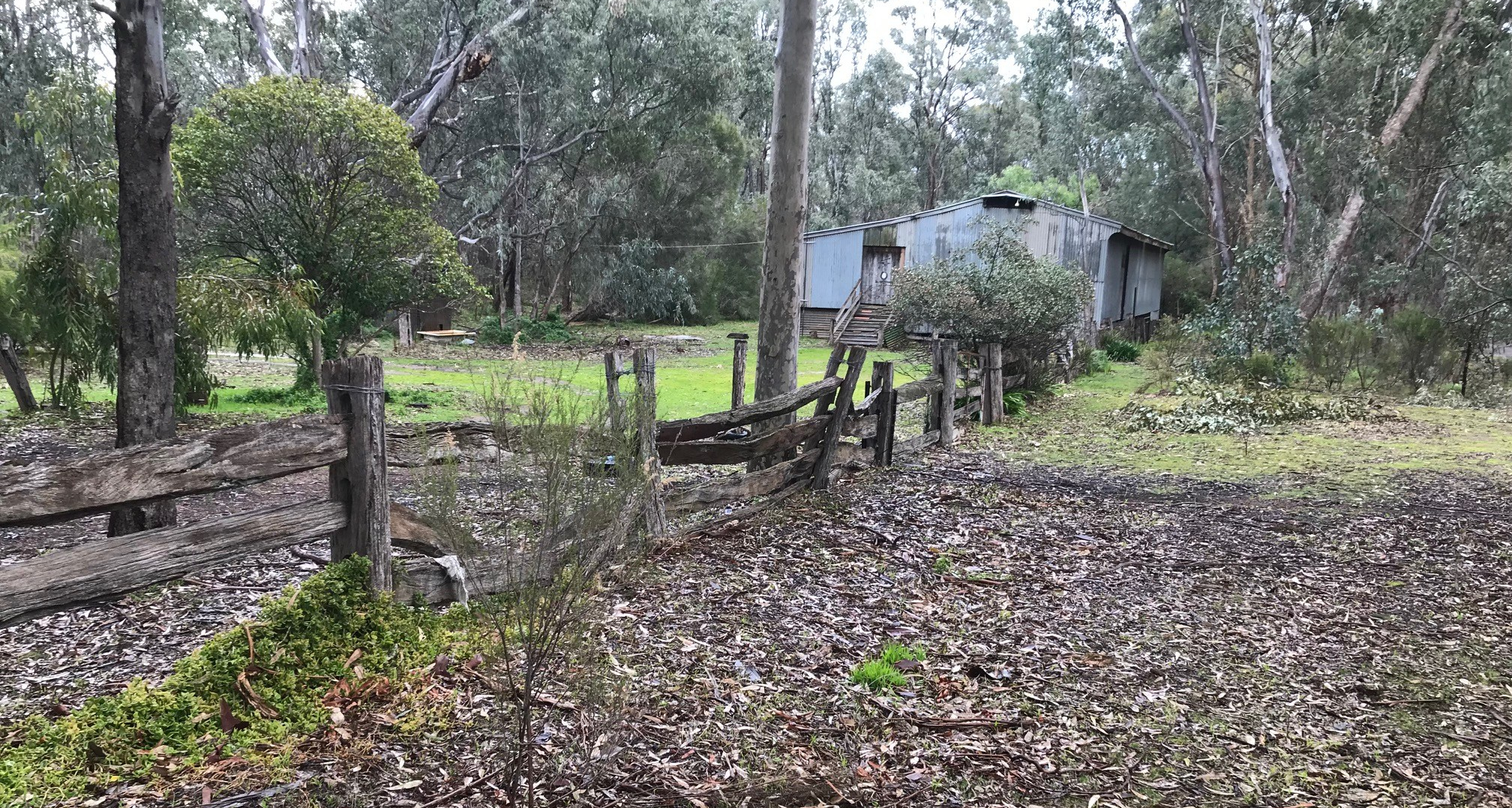 Thousands of Irish people immigrated to Australia in the 1800’s to escape poverty and repression in Ireland.  In the case of my branch of the McCarthy family, they came hoping to make their fortunes on the gold fields.  However, when the opportunity to select land became available, they rose to the challenge and became farmers.

Over the course of 4 years from 1862 to 1866, most of the McCarthy family immigrated to Australia[1] and settled on the McIvor Diggings at Golden Gully.  My great grandparents, Patrick and Ellen McCarthy with sons James and Jeremiah were amongst them.

Ellen, nicknamed “the mother”, arrived after Patrick had settled and was apparently none too pleased at the living conditions of the miners at “The Gully”.  Patrick had built a lean to on the side of the Murphy’s bark hut.  There was too much drinking going on.  It is rumoured that the police would not go near the Irish encampment.  Patrick apparently had a bent finger which he claimed was broken in an altercation with the police.[2]

So, after some years of tolerating these living conditions, Patrick selected land under the Land act of 1869 and they started life at the Boughyards.  Application was made for their first selection for 119 acres, 3 roods, 33 perches of land on 24th August 1874.  The license was finally approved on 20th September 1875[3].

The life of a farmer in those early days was not easy.  They were living on virgin bush land which had to be cleared before they could do anything.  Timber gained from the clearing was used to build a dwelling and to erect fences. These first fences, roughly hewn from huge tree trunks, were the reason the property was named the Boughyards. The Land Act of 1869 allowed for a three-year license and within that time they were required to live on the land for at least two and a half years and build a dwelling.  They also had to fence the selection, cultivate at least 10% of the land and make other improvements such as clearing the land, erecting water storages or building out buildings.  If improvements at the rate of £1 per acre were made in the three-year license period, the selector could either purchase the land freehold or apply for a seven-year lease.[4]

Over several years the family increased their land holdings, acquiring further selections in the names of Patrick and Ellen’s children and worked together to make the required improvements.

As the clearing of the land continued, much more timber was harvested.  This excess timber was carted by horse and dray to the South Heathcote rail yard.  At the end of a long day carting to the rail yard, one of the party would be dispatched to the nearby Ethridge’s Hotel to have the billy filled with beer.  A two quart billy could be filled with beer for sixpence.  The billy would then be passed around between the thirsty men.

As time moved on and the family extended their land holdings as far afield as Bendigo and Lancefield, there were still many trials and tribulations.  Drought and flood were a constant in this harsh new country.

There was also the very real risk of accident and injury as evidenced by James McCarthy’s accident.  On a fateful day in February 1914, they were harvesting and young William Taverner was pitching into the thresher.  James had just given the driver instructions to start the engine and jumped onto the thresher, but his foot slipped. Fortunately, the quick-thinking William Taverner was able to throw the belts off the wheels which prevented James from being drawn further into the machinery.   Amidst the chaos that ensued, James is said to have calmly instructed the workers on how to extricate what remained of his leg from the machinery. Two doctors and the local police sergeant soon arrived on the scene.  The police sergeant found James’ crushed lower leg with boot still intact. James’ leg was later amputated above the knee as his knee cap had been torn off.[5]

Despite the harsh conditions of life on the land, the McCarthy family prospered.  At the time of his death in 1925, Patrick owned more than 900 acres of land valued at £2950.   He also owned 528 sheep, 2 horses, 2 milk cows and a jinker and buggy as well as having some money in the bank.[6]

It is testament to this close knit, hardworking family, that they managed to continue to work together to acquire more land and eventually prosper.  In fact, there is an interesting family story about a pot of sovereigns being buried at the Boughyards.  My grandfather Patrick was heard to say, “There was never any bloody sovereigns there.”  But his sister Norah, on her death bed, asked whether had they found the sovereigns.[7]  It sounds like fanciful Irish folklore, and no, the sovereigns were never found.